Our company packs and exports sweet cherries as well as chestnuts. We try to deserve your confidence by offering the highest quality ones of these fruits.

Appearing in the autumn season, chestnut is fondly consumed by cooking on embers, boiling, candying, in flour form, in cakes and as garnishing in some specialties. A good, quality chestnut is usually 2,5 cm in width and 15-20 g in weight. However, the variety called small chestnut has a size and weight smaller than this.

In our country, fresh chestnut is grown in a quality and grafted form in Ödemiş, Nazilli, Kiraz, Bozdağ and Beydağ regions. Although varied in variety, marron is the variety which is most suitable for exports. Chestnuts are sorted out by their number per kilogram such as 4045 the largest size, 50-55, 60-65, 70-75, 80-85, 90-95 and +100 in calibrating machines, then rubbed clean and selected and processed. Processed in Big Bags, jute bags and nets, chestnuts are packed and exported in packages of 1 kg to 1000 kg.

Benefits for our Health

Besides the above mentioned highly nutritional values;

Chestnut decreases the high cholesterol in blood.
Keeps blood glucose level under control. In this respect, it is beneficial for diabetics.
Reduces the risk of having cancer for animals. This effect is being examined on human as well.
Chestnut is mostly recommended for whom complaining of low potassium. Because there is 500 mg. of potassium in 100 gram of chestnut.

Cherry, the herald of spring, has an effect of lowering cholesterol and blood glucose and enhancing the heart health. It is stated that cherry protects the heart health with its intense content of anti-oxidant. Cherry contains the compound named ellagic acid in high quantities. Ellagic acid neutralizes the synthetic and natural carcinogens and prevents them to harm the healthy cells and transform them into cancerous cells.

Cherry, which has a natural taste and flavour, contains an intense level of fruit sugar. 100 gr. of it is approximately 40 calories. Since laevulose, the fruit sugar that it contains, can be digested easily, the diabetics as well can consume cherry together with nutriments that are sources of proteins. It contains vitamins B1, B2, B5, magnesium and calcium. It supports the harmful substances in blood to be thrown out. It helps to reduce the burden that has formed in the liver due to excessive drug consumption and nicotine to be thrown out of the body.

Cherry, which contains carotene, an important source of vitamin A, helps to prevent the problems with eyes. In 20 pieces of cherries, there is 12 to 25 mg. of anthocyanin, which is ten times more effective than a piece of aspirin. 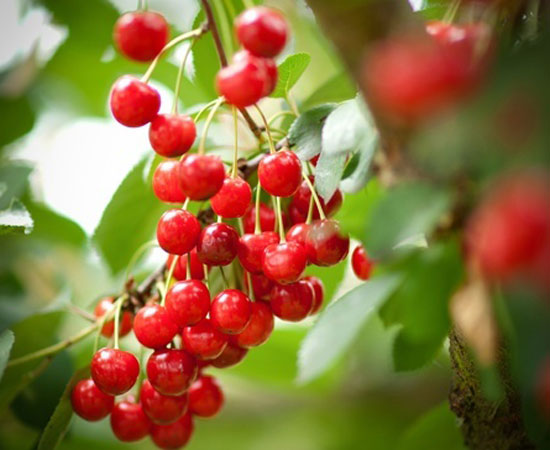